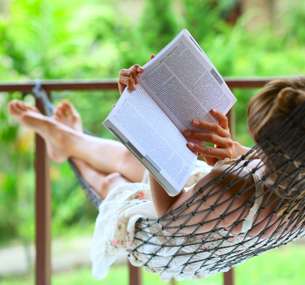 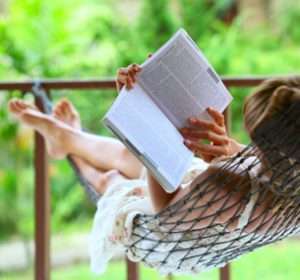 If you’re like me, you always have a stack of books ready for those spare moments when there is time to read. I’m a confirmed bookworm. And even if you’re not an avid reader, you probably want a title or two ready to take on your summer vacation.

There’s nothing more relaxing than reading a new novel while catching some rays on a sunny beach or by an inviting pool.

Here are some hot new reads in four different genres. What’s your pleasure?

Wait for You by J.Lynn: Avery sets out for college determined to forget her past. But then she meets handsome Cameron. Can she risk exposure in her desire to find love?

Finding It by Cora Carmack: Kelsey is on a whirlwind European tour after her recent college graduation. But underneath all the party atmosphere is a lonely girl. When she meets Jackson everything changes.

Wild Montana Sky by Debra Holland: Elizabeth leaves home and learns to live the tough ranch life on Montana in Sweetwater Springs. Will she fall for a rich banker or a rugged cowboy? This is the first in a series of six novels and winner of the Golden Heart Award.

Never Go Back by Lee Child: Jack Reacher has gone back to Washington D.C. and it’s probably a mistake. A former military police officer, Reacher travels to headquarters to meet the new commanding officer and the intrigue and action begin.

A Trick of the Light by Louise Penny: In this, the seventh in the Inspector Gamache series, Penny takes the inspector back to the village of Three Pines in Quebec. Artist Clara Morrow’s friend has been murdered. Even as the story unfolds, Gamache questions if he’s discovered the real truth.

Flash of Bones by Kathy Reichs: Reichs is the producer of the highly acclaimed television show, Bones. It’s NASCAR time and thousands of fans have gathered for the big race. When a body is found in a metal drum, Dr. Temperance Brennan is called on to solve a twelve year old mystery.

The Garden of Burning Sand by Corban Addison: Zoe Fleming is a successful human rights attorney living in Zambia, far from her old life in Washington, D.C. When a young girl is raped, Zoe teams up with Zambian police officer Joseph Kabuta to investigate.

Bittersweet by Miranda Beverly-Whitteman: Mabel Dagmar is a scholarship student at a prestigious East coast college. She’s invited to spend the summer in Vermont at her roommate’s estate. Mabel loves the moneyed world she discovers… or does she?

Murder at Mullings by Dorothy Cannell: Florence Norris is the long-time housekeeper of Mullings, the ancestral estate of the Stodmarch family. When the man of the estate marries a new wife, things change quite a bit in this quiet, conservative home. Then, there’s a murder.

Midnight Crossroad by Charlaine Harris: Set in a mysterious Texas town, this is the first in a trilogy. This small town is the perfect place to live a quiet life and keep secrets hidden. But when one resident disappears the secrets begin to surface.

Red Rising by Pierce Brown: Written by an up and coming twenty-five year old author, this is the first in a dystopic trilogy. The setting is a mining colony on Mars and the main character is caught in between the government and a revolutionary group. The series has been compared to the Hunger Games.

Words of Radiance by Brandon Sanderson: Set in the realm of Roshar, this second in a ten book series leads readers on a quest to understand the long-lost magic of the land. An epic fantasy saga.

Find your summer reading books at: