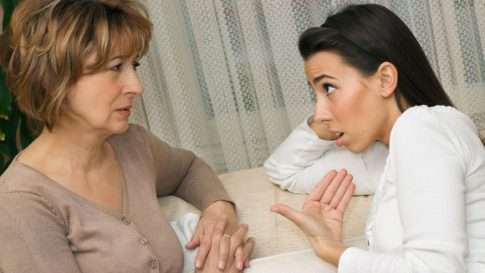 Every time a young woman says, “I do” a new mother-in-law is born. And for some women this is not a welcome state of affairs.

Why? Well, because mothers-in-law are often seen as judgmental of the new bride and unable to see any flaws at all in their precious sons. The role can be full of tension for both women. What to do?

A recent unofficial poll among a group of women reinforced the uncomfortable truth that this is a tricky relationship requiring tact and sensitivity. And the themes running through all successful relationships were important to understand.

The poll found that most successful relationships between mother-in-law and daughter-in-law were built on mutual trust and understanding. Many of the younger women spoke of uncertainty and lack of confidence in their role as a daughter-in-law, especially in the early years of their marriage. While they were learning to be a wife, they also had to take on the responsibility of a relationship with a woman they barely knew. Those who were able to develop a positive relationship, even a friendship, went through a time of testing—a time of discerning how to trust and when to “let it go” when there was a possibility of conflict or misunderstanding.

Another woman spoke of feeling offended and hurt when her mother-in-law gave unwanted advice and criticism of her personal life including time management, finances and the discipline of her children. In this case the relationship was salvaged when the young woman’s husband stood up to his mother and set some clear boundaries for advice, clearing the way for a freer exchange of ideas without the perception of judgment.

The most important value, by far, was the development of mutual respect. Respect doesn’t imply agreement on issues, but does require the freedom to disagree without argument or unpleasant behavior. It’s a difficult, but necessary achievement.

Since we grannies are on the mother-in-law end of this problem, here are some tips to keep your relationship with your daughter-in-law on an even keel.

Accept the fact that your son has chosen another woman to love and respect.

Display love and affection honestly. Know it may take some time for the relationship with your daughter-in-law to mature.

Overlook flaws or failings in your daughter-in-law. Try to remember what it was like to be a new wife. Look for the good.

Speak positive things to her and about her.

Understand she is young and may change some of her current opinions and habits.

Refrain from giving unsolicited advice, even if it’s “right.”

Be supportive and willing to help, when asked.

Be patient. You were once a young, inexperienced woman.

We all want our family gatherings and relationships to be strong and healthy. We, as the older and hopefully wiser women can take the lead in setting an example of loving, kind behavior to our son’s choice of a life partner.

Articles on the mother-in-law/daughter-in-law relationship:

Take My Mother in Law

Laughter and Your Relationship with Your Grandkids
Scroll to top
This site uses cookies: Find out more.