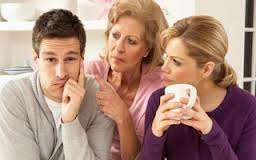 What is the difference between outlaws and in-laws? Outlaws are wanted.

How are mother-in-laws and shotguns alike? If one is around you want to shoot it.

Funny? Well, yes, if you don’t happen to be a mother-in-law. In-law jokes have a history as long as your sleeve and some of them are funny because the mother-in-law in jokes is, by definition, a controlling, disapproving and nasty person. What does that do to our real family relationships in the real world? It makes us a bit nervous.

The roles of mother-in-law and son-in-law are full of landmines for both individuals. In the first place, the two people are forced into a relationship that is tricky. It’s a close, family sort of relationship but without the benefit of being from the same “tribe.” Have you ever noticed the wildly different cultures between families? There are all sorts of variables. How much money and prestige, a wide range of family values, religion, involvement in hobbies and sports, and the list is endless. The smallest difference can become a mountain of a problem. Do you call her “Mom” and does she call you “Son?” Do you kiss her or otherwise show affection—especially if it’s affection you don’t feel? It seems there are endless ways to offend one another.

Deanna Brann, Ph D in clinical psychotherapy has written a new book entitled Reluctantly Related: Secrets of Getting Along with Your Mother-in-law or Daughter-in-law. Her advice will translate nicely for sons-in-law as well. She speaks of various patterns in the relationship and how to develop a more natural, easy-going one. Is the current pattern a “walking on eggshells” one or have you settled for a phony “Camelot” relationship in which no one can say what they really feel? Brann helps readers get rid of old baggage in the relationship and points the spotlight on perceptions that may be inaccurate. Her solutions are practical and helpful.

If you, as a senior, are in the role of mother-in-law, what can you do to make the best of this volatile relationship? Here are a few tips.

Focus on the Good

Your son-in-law may seem lazy, but does he have a friendly personality? Or is he a workaholic but you’re pleased with the income he brings home? There are always two sides to any issue and you can choose to focus on the positive things in his life. And don’t just decide to think that way, but be ready to give a few compliments and speak kindly about him in front of your daughter and the grandkids. Our perceptions can change over time and speaking positive words can actually have an effect on behavior. You didn’t choose to marry him, but your daughter did. As much as possible, focus on his good points.

A careless word cannot be unspoken. It’s like trying to put toothpaste back in the tube. You probably have legitimate concerns and opinions about the things your son-in-law does or fails to do, but it’s usually not productive to talk about them, especially to other family members. And offering advice that is not expressly asked for is another no-no. Our children are finding their own way in the world. Their money management, parenting and disciplining, their choice of hobbies and their expression of their faith—all of those are their own choices. We have the benefit of more experience and may have learned some life lessons they would be wise to heed. Still, it’s their life and not yours. Don’t say it.

There is not one perfect person in the entire world. We usually see our own children in a golden light, but even they are flawed. When we look at a son-in-law whom we may not admire or understand, it’s tempting to be critical and disapproving. That attitude is not only unhelpful, it may actually hurt the daughter you’re trying to support and the grandchildren you love unconditionally.

Be kind to your son-in-law. Be patient and give the benefit of the doubt. Overlook the character flaws or differences you recognize and instead build on his positive character traits. It’s not easy, but in an imperfect world it’s the loving thing to do. You’ll avoid the divisions and outbursts at family gatherings that everyone dreads and you’ll begin to build a more positive relationship with that person to whom you are “reluctantly related.”

For more books on the in-law relationship see:

The Mother-in-Law Dance by Annie Chapman

What’s a Mother-in-Law to Do? By Jane Angelich

Mothers-in-Law vs. Daughters-in-Law: Let There Be Peace by Elisabeth Graham